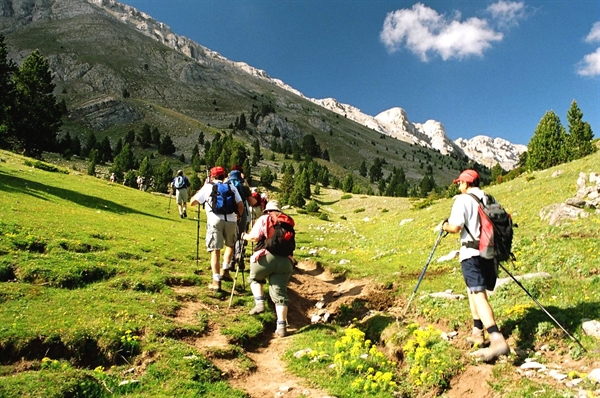 The Reapers’ Route, which starts at the village of Gósol is also known as the Road to Cerdanya, as it leads to Bellver de Cerdanya (La Cerdanya - Spain).
In times past, this route was often used by reapers, mule drivers, Catalan militias, highwaymen, musicians and smugglers. It was also followed by the painter Pablo Ruiz Picasso in 1906, during his stay at the village of Gósol. This historical route, which is now signposted, crosses the Serra de Cadí (Cadi ridge) and can be walked in seven or eight hours. Along the journey, travellers can discover a number of unique landscapes and also see some of the Pyrenean fauna in >the Cadi-Moixeró Natural Park. In winter, it is possible to follow the same route using skis or snowshoes. It is also possible to do the Reapers’ Route over two days, as it is possible to spend a night at the Cèsar August Torras mountain refuge and then continue the route the following day.

The Ruta dels Segadors (Reapers’ Route) starts at Gósol and follows the road for La Cerdanya in the direction of Font Terrers (GR-107-150), arriving at Collell and Les Bassotes. It then keeps to what is strictly the PR-C-124, winding slowly uphill to Prat Socarrat and the Serra (ridge) Pedregosa, where trekkers will find a tremendous panoramic view of the north face of Pedraforca, the Serra d’Ensija and the Gresolet beech forest. From this point on, and up to the Gosolans pass, the slope becomes somewhat gentler. It is then possible to go on to the Tordera spring or even to Comabona (2,547 m), which is one of the highest peaks in the Cadí range. From Comabona, which is a 30 minute walk away, following GR-150-1 (a variant of GR-150) along the mountain crest, there is a sensational view of La Cerdanya. The Cortils mountain refuge, which is to be found at the head of the mountain pass of the same name, offers the possibility of shelter in the case of unexpected bad weather.

Now on the Cerdanya side of the mountains, the path leads steeply down to Prat d’Aguiló and to the Refugi Cèsar August Torras (mountain refuge), which belongs to the Federació d’Entitats Excursionistes de Catalunya (Catalan Hiking Federation) and is manned in summer and on certain other weekends throughout the year. When open, it offers a canteen and drinks service. The route then follows the track that leads up from Montellà to the Coll de l’Home Mort (Dead Man’s Col), where a forest track turns off to the right and then follows a trail through a magnificent forest of Scotch and Spanish pine before reaching Baga de Ridolaina. The path - which by now has only the gentlest of gradients - then leads on to the Oriol corral and to the Tosca spring, before leading trekkers down to the Planes d’Hereus and the Pla de Nas (plains). Once at Nas, it is a case of following the Camí Vell (old path), which offers fantastic views of Bellver and La Batllia, and then following a livestock herding track that runs very near to Olià (GR-150). This new path leads across the plain to Pi and Talló. It is then only a few hundred metres more from Talló to Bellver de Cerdanya (GR-107).

The whole walk should take trekkers around 7 to 8 hours to complete. It is also possible to follow the route in the opposite direction; starting from Bellver de Cerdanya. Heading towards the north face of Cadí is certainly a stirring experience and the path through the Ridolaina valley is also very enjoyable. But this adds another hour to the walk, due to the steepness of the climb, while the ascent to the Gosolans pass also involves overcoming quite a pronounced slope. But in this case, stopping off at the Refugi Cèsar August Torras, offers the possibility of completing the walk in two days.

Another very interesting and highly recommendable option is to walk the route in winter, either on skis or using snow shoes. When there is sufficient snow, it is not very difficult to go from Gósol to the Gosolans pass, or to go up to Comabona. It is also quite easy to travel from Bellver de Cerdanya to Prat d’Aguiló, but the section between Prat d’Aguiló and the Gosolans pass is quite another question, both going up and coming down. Even so, with an ice-axe and crampons these difficulties are considerably reduced, although the route still calls for a certain amount of experience of high-mountain winter trekking, especially when there are icy conditions and the threat of avalanches. 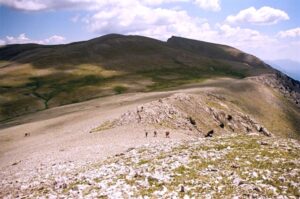 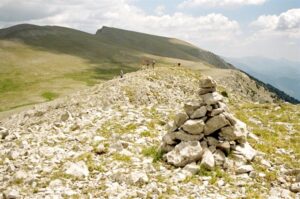 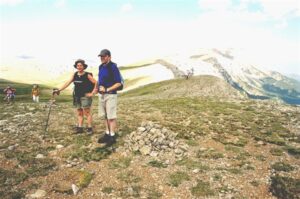