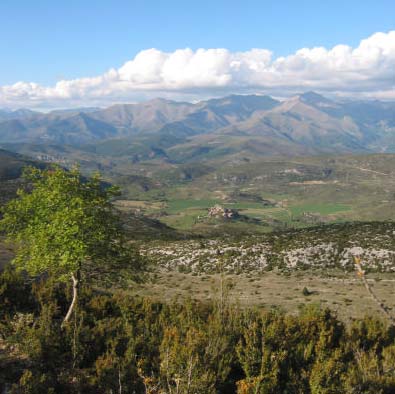 Route the Path to El Portús

The vall d’Adons (Adons valley) is a beautiful high plateau and is located in the southernmost part of the municipal area of El Pont de Suert (Pyrenees – Alta Ribagorça - Spain). The village of Adons, is the most important settlement in this small comarca (local district), which also contains the settlements of Abella and La Beguda. The Camí del Portús (Path to El Portús) begins at Adons, where the first of the long winding routes leads visitors through a land that is relatively poor in vegetation on account of the altitude, the karstic scenery and the lack of crop lands. At the first mountain pass, at the meadows of Lo Cumó, a gentle path climbs up over a stony substratum that never ceases to surprise visitors with its well-raked forms. These include small pools, or ”cameles”, which fill with rain water and from which both wild and domesticated animals can drink, in an area that is otherwise generally very dry. Higher up the mountainside, the vegetation changes. There are isolated examples of Scotch pine, bearberry with its characteristically red fruits and small, densely-packed branches of lavender, which embellish a path that leads to the depression containing the trossos de l’Avedoga (agricultural plots of Avedoga). 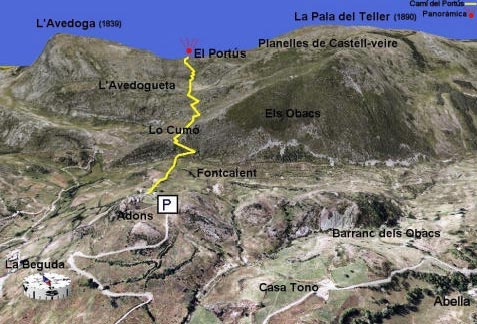 The final part of the path climbs up along the "pala de l’Avedoga" (spade of Avedoga), where visitors should look out for one of the highlights of the walk. This is the presence of a solitary fir tree that serves as evidence of the previous existence of a fir forest that would have once covered this area until it disappeared, centuries later, as a consequence of the impact of man. Local folklore maintains that this was where the wolves of the local area used to hide and that this was one of the reasons for the destruction of the forest. After passing between two mountain ash trees, or besurts, an area of low shrubbery will take visitors to the inhospitable parting of the sierra, where the sheer power of the relief is manifested in the vertical cliffs that sharply plummet down towards La Terreta. This is a territory of crows, kestrels, griffon vultures and, of course, the emblematic bearded vulture. Finally, before their eyes, visitors will see the collapsed form of El Portús, a slanting sword mark cut through the calcareous sierra, some twenty metres long and three metres wide, in which various types of vegetation grow, including saxifrage and bear’s ear. Throughout the populated history of La Ribagorça, this area has no doubt done much to bring the mountain closer to the plain.

-The whole route is signposted with wooden posts and reference markers painted green and white. There are also signposts at the most problematical points along the route.
- Visitors should make sure that they have appropriate clothing and footwear and should take some water with them, because there are very few springs along the route.
- It is also advisable to take a camera, a pair of binoculars and a map of the local area.
- In this sierra it is common to experience sudden changes in the weather. It is therefore recommendable to take care, heed weather forecasts, and be well-prepared for a variety of meteorological conditions.

The name of the village of Adons has two possible etymological origins: it could be derived from the Germanic term Ató; or alternately, it could mean ‘passing place or port’. L’Avedoga (or also La Bedoga) is the name of the mountain along which the route runs and means ‘place of birds’. Popular legend says that the now-lost fir forest “is hidden”, in the rafters, beams, joists and lintels of many of the houses of the neighbouring settlements. It is also said that some of the crossbeams that were used to build the railway of La Pobla were also taken from this area. El Portús, had traditionally formed part of a livestock herding route, or cabanera, and served as a point at which to count the number of animals. 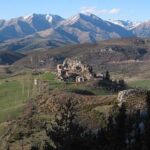 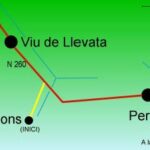