The Comtat of Ribagorça: The light from images

The Romanesque art and architecture of the Vall de Boí

The Vall de Boí boasts one of the most important heritage groups in Catalonia, which includes the Romanesque churches of the Vall de Boí, a set of buildings that has been recognised by UNESCO as a World Heritage Site. This route brings visitors closer to the Romanesque art and architecture of the valley and to the context and events that surrounded these constructions.

The Centre del Romànic de la Vall de Boí (Romanesque Centre of the Boí Valley) is the starting point for this route which guides visitors between the church towers that are scattered across the valley. Each church has a particular element that makes it especially interesting and unique.

In the year 1123, Bishop Ramon Guillem consecrated the church of Saint Climent de Taüll. This building has a basilica-style layout with three naves and a wooden gable roof, a chevet with three apses and a bell tower. Inside the building, some original examples of art work have been conserved as well as a reproduction of the most well-known and emblematic image of Catalan Romanesque art: the Pantocrator (Christ the Almighty) of Saint Climent of Taüll.

The same settlement contains the church of Saint Maria de Taüll, , which was constructed at the same time as that of Saint Climent. It has a basilica-style layout with three naves, three apses at the chevet and a belfry. Its other most significant features are the copies of paintings in its apsidal recess, or exedra.

The Church of Saint Joan de Boístill conserves some of the oldest architectonic elements in the whole valley, which date back to the 11th century. Its layout consists of three naves, a central apse and apsidal side chapels. The inner and outer walls of the church bear frescos painted by the Master of Boí. The original versions of the majority of these paintings are now to be found at the MNAC.

Just next to the Centre del Romànic (Romanesque Centre) visitors will find the church of Saint Eulàlia of Erill-la-Vall, where the most outstanding element is the six-floor belfry with its Lombard style decoration. Inside the building, it is possible to see a reproduction of a group of sculptures showing the Davallament (Christ’s Descent from the Cross), created by the workshop of Erill.

The Comtat of La Ribagorça came into existence in the year 920 as a result of the division of the Comtat of Pallars-Ribagorça. During the 11th century, the Vall de Boí became the focus of various disputes between the counts of Pallares. Yet it was in this, and the following, century that a rich and very intense interest in construction developed. The events of these centuries were closely related to the process of feudalisation and an increase in the power of the Lords of Erill. It was they who promoted the construction of churches. These constructions were both a sign of their power and prestige, being built with the booty that the lords obtained through their participation in the campaigns of the “re-conquest”, when they fought alongside King Alfons el Bataller (Alphonse the Battler) of Aragon, and of the social progress that took part within this territory. 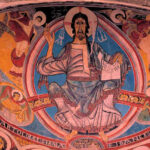 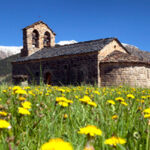 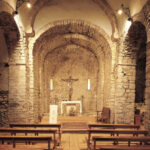 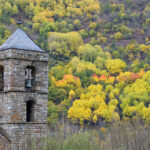