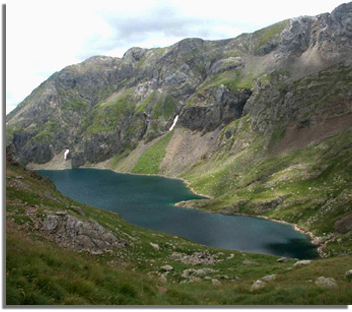 Transhumance could be described as the domestication of a millennium-old nomadic activity by modern man. This route seeks to recover some of the old paths and also revive dim memories from the territory’s historic past. Visitors are invited to enjoy a little interpretive rambling as they walk along some of the old livestock herding routes and follow paths designed by shepherds. Come along with us!

The shepherds’ and transhumance route follows tracks and paths that have been used by shepherds and herders since time immemorial and brings visitors closer to a piece of history, allowing them to share in some of the secrets and experiences of the transhumance shepherds and livestock herders of La Ribagorçà (Pyrenees).

The starting point for this route is El Pont de Suert (l'Alta Ribagorça – Pyrenees) and, at the moment, there are four separate stages that can be walked in 3 or 4 days, depending on the physical condition of the walker.

In the summer months of July and August, there is the option of doing one day walks to the summer pastures, where it is possible to see large flocks of sheep and visit the lshepherds’ ecomuseum in the village of Llessuí (el Pallars Sobirà – Pyrenees).

Some suggestions for interpretive rambling

The shepherds’ and transhumance route is a proposal for guided interpretive rambling that consists of a circuit that may take several days to complete. The length of the walk may vary according to the people involved. The route runs through the municipal territories of  Tremp Tremp (el Pallars Jussà), El Pont de Suert (l'Alta Ribagorça), Salàs de Pallars (el Pallars Sobirà), Sopeira (l'Alta Ribagorça), Conca de Dalt (l'Alta Ribagorça)... In the future, it will also take in other settlements that lie in the Aragonese and Catalan parts of La Ribagorça .

Starting point: El Pont de Suert (it is possible to arrive by coach, by the Lleida-Vielha service)
Finishing point: Salàs de Pallars (connection with the train from La Pobla to Lleida)
Duration: 4 days, walking for about 6 hours each day, with 3 overnight stays in rural accommodation.