This circuit invites visitors to walk around and discover destinations with a markedly rural character, where the farmhouses and churches that are dotted throughout the territory form part of a landscape of unique beautiful (El Solsonès - Spain). Following this route, tourists first visit Solsona, and its historic centre, and then proceed through the narrow gorge of the river Cardener, past the Llosa de Cavall reservoir, via the interesting settlement of Sant Llorenç de Morunys and the village of la Coma, to the source of the river Cardener, and then on to Port del Comte, Coll de Jou and Cambrils, with its salt water spring. The route then continues to the Serra Seca vantage point, the Ribera Salada and the bridge at Clop, before arriving back at Solsona.

The proposed walking route visitors to discover an area with a distinctively rural character as they wander through a territory dotted with farmhouses and churches that form an integral part of a most attractive landscape.

Having visited Solsona cathedral and the old town, visitors will cross the gorges of the river Cardener, where they will discover the Llosa del Cavall reservoir. At this point, it is possible to enjoy a truly extraordinary panoramic view of the area and perhaps also even do some relaxing canoeing.

Further north, the trail reaches the village of Sant Llorenç de Morunys, which was formerly known as Sant Llorenç dels Piteus. The village’s original name came from its association with the “drap piteu” (woollen cloth) industry, which enjoyed considerable repute around the middle of the 19th century. Today, however, the village is more closely associated with tourism and the mushrooms that can be found in the surrounding woods; this is a veritable paradise for mushroom pickers. Visitors should also take a look at the Romanesque-style parish church (which is open all day). Inside they will find the impressive Altar dels Colls, which bears fine testament to the best of late Catalan baroque style craftsmanship, a cloister and the recently restored organ.

The Mola de Lord is a small peak that is easily climbed on foot (in about 20 minutes). From its top, visitors will enjoy a fantastic view of the whole valley. It is also possible to meet and speak to the friars who live at the church and the Mare de Déu de Lord. They will also be more than willing to provide guided tours of the monument that gives this valley its name.

Going on towards La Coma, visitors will discover the Pont de Vall-llonga. This is a beautiful example of a Romanesque-style bridge with a single Roman arch that was transferred intact from its original site and reconstructed at its present location in order to make way for the Llosa del Cavall reservoir. There are numerous springs near the small churches of Santa Creu dels Ollers and La Pedra, but near La Pedra there is one that is particularly appreciated for the beneficial and curative properties of its waters. This is La font Puda and in times past people used to go there to do “novenes”. This consisted of drinking its waters for nine consecutive days in order to treat skin complaints of every imaginable type.

Following the river Cardener, the trail leads to the picturesque village of La Coma and to the springs that originate from its river. These are fed by the snows that fall at Port del Comte. The route then continues up to the Port del Comte ski resort, and then after another 15 minute walk from the Jou pass, visitors will reach the leisure area and vantage point of La Creu del Codó.

Continuing in the direction of Cambrils, a small mountain hamlet, visitors will discover a salt-water fountain and some former salt mines. Heading down to Solsona, it is well worth stopping off at the Serra Seca vantage point and at the Pont del Clop, which offer classic examples of the natural sculptures left behind by the waters of the Ribera Salada. Further on, it is possible to take a 3 km detour to see the church of Timoneda or another detour (of 1.5 km) to see that of La Llena, before finally returing to Solsona. 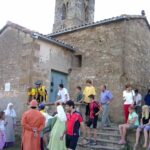 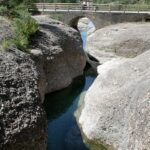 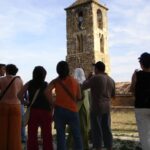 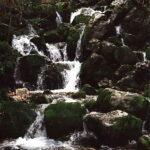 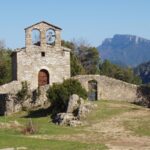