Journey to the land of the Manairons: Route of the mythology of the Pyrenees through the Valls D'Aguilar!

We invite you to discover places of legend and the refuges of the mythology of the Pyrenees (Spain). We have chosen to present the Valls d’Aguilar (Aguilar valleys) through one of the routes described in the book Viatge al Pirineu fantastic (Journey to the Fantastic Pyrenees) by Pep Coll. The myths and legends that it and the work “Marrades: màgia i realitat a la muntanya” (Marrades: magic and reality in the mountains), by Joan Obiols, contain are all connected with the proposed route.The mythology of the Pyrenees (Spain) is ever present in the Valls d’Aguilar and the route will allow visitors to develop quite a good understanding of the legendary world of the Pyrenees. It will also provide them with the opportunity to discover a little known valley which possesses a natural patrimony of great value and beauty.Visitors to this area will discover some of the most interesting mythological beings of the Pyrenees in the Valls d’Aguilar and in other local mountain areas; the manairons (fairies, which are also called minairons or menairons, in parts of the local area) of La Guàrdia d’Ares. Even today, the rock debris and scree that are found near the village bear witness to the incredible strength of these creatures and it is for this reason that we have chosen the manairons of La Guàrdia as our “guides” along the route. They will be the first mythical creatures that “we will visit” along the fantastic route that we propose here. This also explains why we have called this route “Journey to the country of the manairons”, a title that carries with it an implicit invitation to really get inside a fairy tale, with all of the mystery and adventure that this implies.

Points along the illustrated with ceramic murals:

1. Noves de Segre. The mythology of the Pyrenees

Popular culture has passed on to us many of the legends that were handed down from generation to generation and from grandparents to grandchildren on winter evenings around the kitchen hearths or in the living rooms of the old houses of the villages of the Pyrenees. These are human explanations for phenomena that had no other logical or reasonable explanation. It is within this context, and under these circumstances, that a whole series offantastic beings appeared to whom supernatural powers were attributed, such as the ability to turn large mountains of rock to scree, prevent hailstorms, heal illnesses and predict certain future events. Thus, we find the likes of manairons, enchanted ones, giants, witches, demons and “pantigana” women.

Popular legend tells how, one day, the master of Cal Feu in La Guàrdiawas travelling to Organyà with his servant via the Collada (col) del Pillat. When they arrived at Arreposador, the master realised that he had left at home the container housing the manairons; small, brave beings that can be captured from a plant on the night of Saint John, whenever there is an old moon.

-Ton, you must go back home and tell my wife to give you a container that I have on my bedside table, but you must not open it, regardless of what may happen.
The servant generally did as his master told him, but he could not resist the temptation to pry and to find out more about the container. He opened it and straight away a group of obsessed manairons emerged from the container, demanding him more and more work to do.
-Turn as much of the rock into scree as you can –Ton ordered them, frightened and surprised. When it seemed to him that the manairons had started to do a bit too much work, Ton tried to convince them to go back into the little box, because if not...
The surprising and even inexplicable rock scree and debris that can be found in the Obaga forest of La Guàrdia provide proof of this story.

3. Taús. The last Moor in the country

He lived all alone in a tower and always with a sigh in his heart. Watched and pursued, he had to kill and steal in order to stay alive. He was the last Moor in the country. He had become so aggressive and distrustful that if anyone from the country drew near to him, he would kill them without thinking twice. He would only calm down –if at all!- when he saw a woman. And in time, this weakness would cost him his life. His violent behaviour kept on getting worse and worse until one day, the people of Taús set about their work. Altogether, they decided that a young man from the village should disguise himself as a woman and go to see him in his tower. And that is precisely what happened. When the Moor saw that such a beautiful and well dressed young woman was approaching him, he ran to meet her and hugged her with tremendous passion. At that precise moment, he noted a strange coldness and suddenly fell to the ground like a stone, with a knife dug into his bowels, in a mortal wound.

4. Castellàs del Cantó. The secret of the enchanted ones

The enchanted ones were very, very small women who used to live hidden at the bottom of a pool of water. They only dared to come out from their hiding place once a year; on the night of Sant Joan (St. John). As soon as it got dark, all of them would appear out of the water and begin to wash their clothes, which they then hung out to dry in a nearby cave. The people from the neighbouring villages knew that these clothes were authentic treasures. Those who could steal a piece of the laundry of the enchanters could be sure that their household would never know hardship in the future; though they would never get rich, either. It is clear that it was never easy to steal any of their clothing, not even a pillow case or a handkerchief, because they always guarded their clothes with great zeal. Even so, it is held that some clever people did manage to steal some of their clothes.

5. Biscarbó. The treasure of the king of England

At Obac, there is a dolmen, which the people of the local village call theLlosa (slab) del Corralet. The oldest inhabitants of Biscarbó used to explain that in ancient times there had been a great war and that the slab had marked the place where a king of England had been buried after he had died in combat.
They also explain how two married couples once came to Biscarbó with picks and shovels. They found the dolmen and then set to work digging. They were looking for a treasure that, according to them, had been hidden just below the dolmen. Needless to say, it did not take them very long to give up the task of trying to dig under the dolmen.

6. Argestues. The creation of the Pyrenees

The world was originally as flat as an ironing board, but God then decided to create the mountains. He took a sack full of rocks and dropped a rock wherever he felt fit, thereby instantly creating a mountain. But the rocks from that sack were so heavy and pointed that the sack finally broke and all of the remaining rocks fell on the earth between the Atlantic and the Mediterranean. When God got back to heaven, he looked down on those mountains and felt so captivated by their beauty that he began to cry with emotion. It is said that those rocks were what are now the mountains of the Pyrenees (Spain) and that the tears that God wept formed the lakes that can now be found spread throughout this mountain chain. 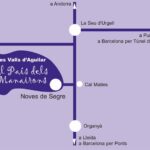 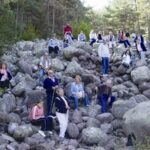