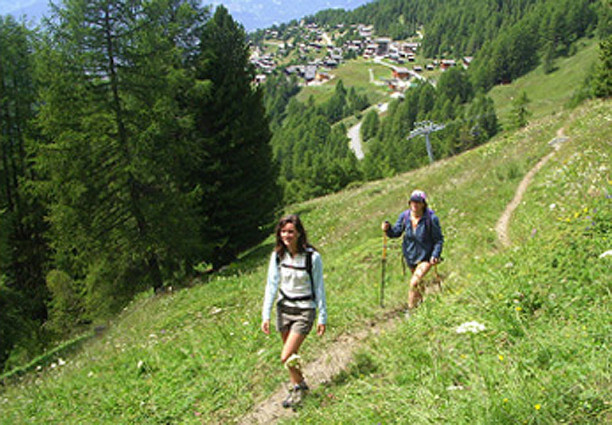 A NEW TREKKING ROUTE IN THE PYRENEES!

Thanks to the opening of two new staffed mountain shelters in the Val d’Aran, Era Honeria in the Val de Torán and Conangles near the southern mouth of the Vielha Tunnel, it has been possible to create a new trekking route that runs through the most significant villages and areas of the mountains of Aran (Val d’Aran).

The SETAU SAGÈTH is a circular route that begins and ends in Vielha. It has a total length of 103 kilometres and an accumulated variation in altitude of 9,480 m. The route crosses three mountain passes that are full of history and tradition. The Coll de Guerri, at 2,320 m. connects the Vall de Toran, an authentic paradise with its primary forest, hanging valleys and deep gorges, with the lakes of Liat and the area known as the “Territori Miner” (mining area) of the Vall d’Aran, which takes its name from the old mines that used to be worked in this area. The Port de Rius, at 2,340 m, stands on a former transhumance route and is in part of the Val d’Aran that contains several large lakes, such as L’Estany de Mar i Rius. In the past, flocks of sheep from Aragon used to pass through this territory on their way to the Aranese pastures of Colomers and Restanca. The Port de Viella, at an altitude of 2,442 m., is the highest point on the route. This is a natural pass and one that has been historically significant for both Aran and the Pyrenees. For centuries, it has been used by the inhabitants of the valleys as an important communications route and channel for transporting merchandise.

Much of the trekking route, which has been divided into 5 different stages, follows the same course as the long distance walking route GR 211. As well as the walk, it also offers cultural and heritage interest. The first stage coincides with “Camin Reiau”, a footpath that connects the different settlements of the Val d’Aran, and will lead walkers to the best examples of the valley’s Romanesque artistic heritage. Three of the stages end in population centres in the Val d’Aran. This makes it possible to discover more about the valley’s culture while at the same time enjoying the commodity of sleeping at a hotel.

The SETAU SAGÈTH route pass offers trekkers two different accommodation options and also includes: a route card for collecting stamps at each stage along the route; a map of the Val d’Aran; and a Road-Book of the route. There is also information about a series of other services available to trekkers. But the most important features that distinguish this route pass from most others is the fact that it includes insurance for accidents and other needs and also covers TRANSPORTING LUGGAGE AT EACH STAGE OF THE ROUTE so trekkers can walk the route in greater comfort and only need to carry with them what is absolutely necessary. Trekkers should note that it is possible to do the route in 3 or 4 days, or even in two stages, if preferred. The organisation can also offer discounted prices to trekkers who present a mountain federation card.

1st STAGE: From Vielha to Bossòst

Highlights: The villages that the route passes through, their churches and cultural heritage. Fantastic views of Aneto and Maladeta from Vilamòs.

Highlights: : A day of transition that takes walkers to the magnificent Valle (valley) de Toran. The Plaza (square) del Taro and the Termas (thermal waters) in Les. Visits to the Bossòst plain and views of Les from Canejan.

The main stage and the key to the whole crossing. Its length, variation in altitude and beauty make this a great mountain stage.
From the shelter, follow GR 211 to El Pla de Grauers and Coth de Guerri. Refugio de Liat, Pla de Tor, Borda era Lana, Bagergue and Salardu.

Highlights: The climb up to El Pla (plain) de Grauers through primary forest with century-old beech trees, La Gorja de Herme (Hermes’ throat) and the walls of El Tuc de Herme. The remnants of mining operations at Guerri and Liat. The Estany (pool) de Liat with the Tuc de Mauberme.

Highlights: The cultural patrimony of Salardu and Arties. The Valarties way, presided over by the spectacular north face of El Montardo d’Aran. The pool and harbour of Rius, a place that has been used as a passing place for livestock since time immemorial.

Highlights: Historic pass used for centuries by the inhabitants of these valleys to transport merchandise and to move around. Magnificent view of the Val de Mulleres (valley of women), Macizo (massif) de la Maladeta and Val d’Aran. Arrival in Vielha via its Plaza Mayor (main square). 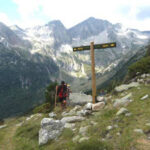 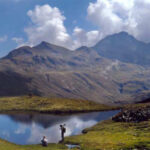 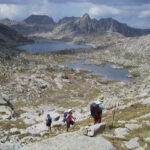 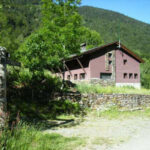 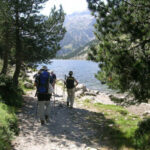 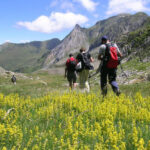