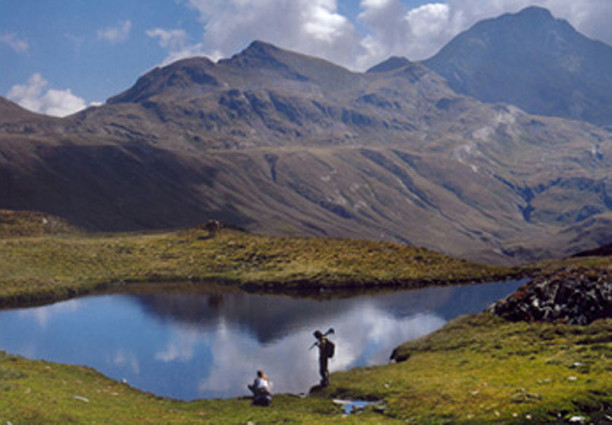 The Great Loop Route, a tour of the Val d’Aran and the Aigüestortes and Estany de Sant Maurici National Park!

For those who want to enjoy a truly unique and spectacular experience, it will be possible to combine the Ruta del Setau Sageth and the Ruta d’ Encantats.

This Great Loop will give walkers the chance to discover two different parts of the Pyrenees: its northern and southern slopes, with their contrasting landscapes and a large concentration of mountain lakes that make this a truly unique route within the European context.

This circular itinerary has been divided into 7 separate stages. It both begins and ends in Vielha and, with a total distance of 140 km and a net variation in altitude of 12.800 m, is the longest circular route in the Pyrenees. It is also one of the routes with the greatest variation in altitude and offers a real challenge to all hiking enthusiasts.

The whole route is covered by the same services as the Setau Sageth and Encantats routes, including luggage transfers between different stages.

Dates: from June to October.

Stage 1 – From Vielha to Bossost.

Distance: 22 km
Variation in altitude: + 737 m / - 1.046 m
Estimated time: From 6 to 7 hours.
This stage follows the old path that used to connect these settlements and offers a route with a continuous series of rises and falls. At Vilamos, which is the oldest village in Aran, the Joan Xiquet Museum presents an exhibition of the traditional Aranese way of life. In Bossost, at the end of the stage, hikers will discover the 12th century church of La Purificació, which is one of the finest examples of Romanesque architecture in the valley.

Stage 2 – From Bossost to the Refugi dera Honeria.

The path continues on to the village of Les, running past a sturgeon fish farm and caviar factory along the way. In Les, it is possible to see the Taro, a 12 m-high fir tree trunk which is burned on the night of 23rd to celebrate the festival of Sant Joan (Midsummer’s Eve). The route then enters the Val (valley) de Toran, with its great forests, and hikers can enjoy magnificent views from the path that follows the balcony that looks out over the valley. It is then on to the village of Porcingles, with its 3 inhabitants, before the route finally arrives at Sant Joan de Toran and its mountain shelter.

This is the key stage of the crossing and the hardest in terms of both its length and variation in altitude. This is a splendid route on account of its high mountain scenery and the different areas that it runs through and their well-conserved, habitats. The main attractions include: the Ermer gorge, the Grauers woodlands, Llac (lake) Liat and what remains of a former mining exploitation. On the downhill part of the route, hikers will discover the Unyola waterfall and the Riu Vermell (red river), which is so called because of its colour, which is the result of the presence of metal oxides.

Stage 4 – From the Val de Ruda to Sant Maurici.

From Bagergue, a short transfer takes hikers to Pont (bridge) de Locampo in the Val de Ruda. The path climbs up through woodland until it reaches the lakes and the mountain shelter of Saboredo, in the National Park. After reaching the Port (mountain pass) de Ratera (2,543m), the route heads down towards Llac Sant Maurici. It is soon possible to see the fantastic mountain known as Els Encantats (the bewitched) whose twin needles dominate the surrounding area. The route finishes at the lake, where National Park jeeps will be waiting to take hikers down to the village of Espot.

Stage 5 – From Sant Maurici to Boi.

Jeeps will take hikers from Espot to Llac Sant Maurici to continue the circuit. The day’s walk runs through two different areas of the Park, crossing the pass that separates them: the Portarro d’Espot (2,425m), which lies at the very heart of the park. Hikers will enter the Aigüestortes area via Estany (pool) Llong. The name “Aigüestortes” (twisted waters) comes from the numerous meanders of the local rivers. The route then follows the waterfalls down towards Llac Llebreta and then down, even further, to the village of Boi. The Vall de Boi has been declared part of a UNESCO World Heritage Site on account of the Romanesque-style churches that can be found in the villages of Boi, Taull and Erill la Vall.

Stage 6 – From Boi to the Refugi de Conangles..

The route continues along the historic path that used to connect the villages of Senet and Boi. The route passes the 12th century church of Santa Eulalia de Eril la Vall and then heads on towards the Collado (coll) de Basco. Without losing altitude, the route crosses the Port de Gelada (2,069m) and enters the Vall de Barravés. After the village of Senet, it heads back up the valley and on to the Refugi de Conangles, which can be found in a beech wood at the southern mouth of the Tunnel of Vielha.

Stage 7 – From the Refugi de Conangles to Vielha.

This stage is very representative of the route as a whole. It takes walkers back to the Val d’Aran, as it took back many of the valley’s former inhabitants until 1949, when they returned to construct the Tunnel of Vielha. The path still has some reminders of when it was paved to facilitate the passage of horses and merchandise through the pass. Bunkers from the Spanish Civil War also remind visitors of the strategic importance of this mountain pass. From the Port de Vielha, at an altitude of 2,442 m, it is possible to go up to the Tuc deth Port de Vielha, at 2,605 m, and enjoy a fantastic view of the whole Aneto massif and the Maladetas. A long downhill section then takes trekkers back to the starting point: Vielha and its main square. 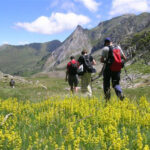 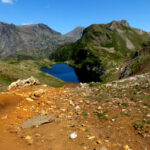 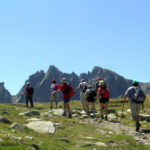