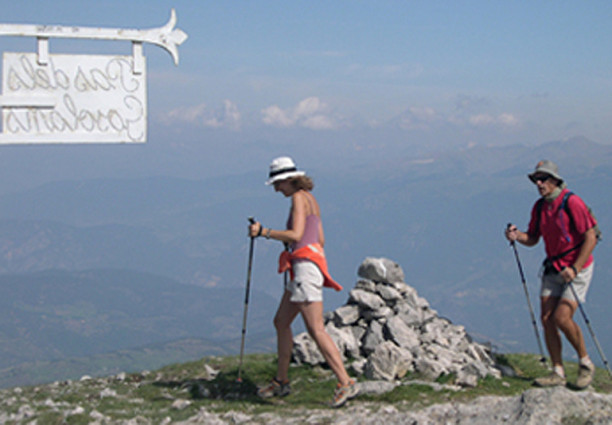 The route is presented here as a series of eight stages between each of the mountain huts. The altitude of the trek ranges from 910 metres up to 2510 metres, with a positive height difference of some 5.000 metres and a distance of around 97 km. Participants are strongly advised to use the trek map, on which the entire route is marked.

Rebost (1.640 m) is the perfect spot to enjoy a magnificient panorama of Alt Bergueda. The building itself has the air of an old farmhouse, and is surrounded by woods of Spanish pine and by alpine meadows.

A well-marked path takes us farther up the mountain on which Rebost is situated, first to Comafloriu and the Serrat Gran and subsequently, following the long-distance path GR150-1, all the way to the top of La Tosa (2.537 m). The landscape is virtually treeless in the latter part of the route.

Niu de l’Aliga, straddling the countries of Bergueda and Cerdanya, is the highest wardened mountain hut in the Pyrenees (Spain).

From here you see half of Catalonia, from Montseny to Montserrat. Look carefully and you will also spot some of the mammals and birds of the Park: the ever present chamois, marmot, bearded vulture, golden eagle, capercaillie and griffon vulture. With any luck you will be enjoying their company throughout the trek.

Making our way down from La Tosa by the GR150-1 we have to negotiate a scree slope, after which the path evens out and wends its way gently through open woodland and meadlows. Coll de Jou, a mountain pass formerly used by smugglers and resistance fighters, is the start of a climb up to Penyes Altes at 2.279 m. This peak has provided many a hillwalker with their first experience of the mountains, the visitors book at the summit bearing testimony to the popularity of the mountain.

Descending to Pla de Moixero we find a fine example of an alpine meadow with an interesting mixture of pasture and woodland species, horses and cows feeding alongside chamois and choughs. We leave the long-distance path at this point and head north, descending through woods of larch and Spanish pine with their undergrowth of Genista purgens and Rhodo, ferrugineum, black woodpecker, Tengmalm’s owl and crossbill are regulars here.

A final climb takes us to the mountain refuge Serrat de les Esposes (1.511 m), a popular spot in Cerdanya and with an interesting legend behind its name.

Leaving Serrat de les Esposes, we are faced with the only incline of note in what is otherwise a very gentle stage. The path follows a track, since tarmacked, skirting the mountain. Little physical effort is required. Now is the time to recoup one’s forces, and take a closer look at the surrounding nature.

Around the halfway mark we encounter for the first time the Route of the Cathars (GR107), a long-distance path across the Pyrenees between France and Spain. We follow it in a southerly direction, past Font Freda with its deliciously cool water, and through the woods so abundant in this section of the Park, until finally we arrive at Pla dels Cortals de l’Ingla (1.610 m). The location of the refuge here affords a stunning view of the Pyrenees (Spain).

We rejoin the GR107 at the start of the next stage of our trek, branching off after a short while to follow a path marked with green and white. This path leads us up through mixed woodland, where beech shows signs of regeneration and chamois are on the increase. The rich variety of species here is noteworthy. Look out for tracks and trails of fox, wild boar, squirrel, wild cat, and black woodpecker, among many more.

On reaching Prat de les Estelles (1.620 m) we continue heading south, ascending by the Vimboca stream to the coll of the same name (1.848 m). We then pick up an abandoned track formerly used by smugglers and woodcutters. The vegetation becomes less varied and we are back in a landscape of alpine meadows and Spanish pine. Following the crest we rejoin the GR150-1, heading west and ascending to Pradell (2.202 m) and the Pas dels Bous (2.253 m), both locations being excellent for enjoying magnificent views. At this point we leave behind the Moixero range and enter the Cadi. We leave too the long-distance path and, flanking the mountain and crossing alpine meadows and stone fields, we head northwest and west towards Pla de les Creus and Prat d’Aguilo (2.010 m).

Prat d’Aguilo is a popular base for tackling the many climbing routes along the imposing north face of the Cadi. Our route, the local path PR124, otherwise known as the Route of the Reapers, takes us up steeply through meadow and scree to the Pas dels Gosolans (2.243 m). The change in scenery is dramatic, as we now encounter a sparsely vegetated alpine environment. Look out for golden eagle and smaller birds of prey.

Enjoy too a first close look of ever-impressive Pedraforca to the south. To reach the mountain we have to cross the ridge Serra Pedragosa and descend to El Collell (1.845 m). From here a forest track winds its way down to the mountain refuge Lluis Estasen. Note again the striking changes in vegetation as we descend: Spanish pine and Scots pine, larch and, further down in the Gresolet Valley beechwoods.

The mountain refuge bears the name of the pioneer of rock-climbing on Pedraforca, Lluis Estasen. It can also claim the longest tradition among refuges in the Park, dating back to 1947.

To reach Gresolet from here we descend by Jaca del Prats, crossing the forest track to take up a path which drops steeply through beech and pine woods, criss-crossing watercourses. The path is narrow and demands constant attention. Once in the valley and across the stream there is only a short but steep slope up to the refuge (1.280 m).

Nestling in a wooded valley Gresolet is the lowest lying of the refuges on the trek. To reach next refuge from here we have to leave the valley, climbing through magnificent beechwoods to the Coll de la Bauma (1.577 m). Beetles, lizards, salamanders, snakes, pine martens and back woodpeckers can be seen along this stretch.

From Coll de la Bauma we continue along the local path rather than the forest track to Coll de la Bena, where we rejoin the long-distance path (GR105/107) and enter a zone with a Mediterranean aspect with thyme and lavender. Descending to one of the lowest points of the entire trek, Cal Cerdanyola (910 m) we pass the quaint romanic church of Sant Marti del Puig. At Cal Cerdanyola we switch to the PR125 and head north up the Torrent del Forat and Els Empedrats, one of the most spectacular spots in the Park, with its foaming rock pools. Keeping to the left of the stream and passing through beech and Scots pine woods we reach the mountain refuge Sant Jordi (1.565 m).

Sant Jordi or Font del Faig is one of the classics of Catalunya (Spain), and point of departure for scaling El Moixero or Penyes Altes.

Our path takes us down rather than up, descending to Ca l’Escriu (1.310 m) on the GR107, before ascending once more to cross the Coll d’Escriu (1.509 m) in the midst of beech and pine trees. We now commence a long descent through impressive beechwoods to Greixer, where we leave the GR, cross the Coll de Pal road and then the river (910 m). Our final ascent begins steeply between fields to the house Millares (1.230 m). Another 30 – 45 minutes or so climb through Scots pine and box brings us back to our start point, Rebost. 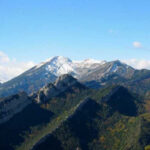 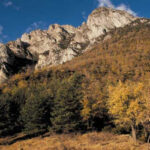 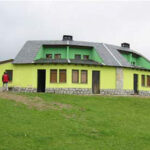 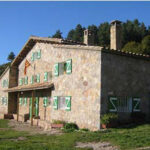 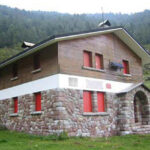 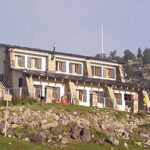 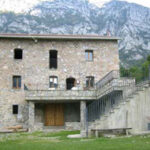 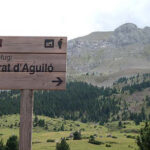