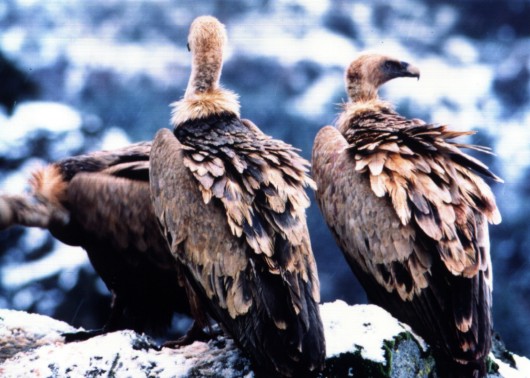 Valley of the vultures route

The Ruta de la Vall dels Voltors (Valley of the Vultures Route) will interest everyone, regardless of their age, who would enjoy spending a day out in the country in an area of great natural beauty and cultural value.This route (31 km) was initially designed for motor vehicles, but it can also be followed by mountain bike or even on foot. It is possible to discover the route alone or to go on a guided trip (the Ajuntament de Tremp offers a free guide service).

Trekkers who wish to enjoy a memorable day out can start from Tremp, where they should take the C-1311; the road that runs from Tremp to El Pont de Montanyana. Once there, they should take the N-230 which will take them to Pont d’Orrit: this is where the Ruta de la Vall dels Voltors really starts.
From Pont d’Orrit the route leads visitors to the village of La Torre de Tamúrcia, which houses the Casal dels Voltors. As well as an information point, this is also a centre for watching and studying birds of prey as they build their nests. The centre receives images from two cameras that have been located at strategic points in the territory and that can be moved in order to observe the local fauna. Visitors should not leave without first visiting the village and the church dedicated to Sant Josep.
The next important place of interest is the Mirador de la Collada (vantage point) at Torogó, which offers visitors a fantastic view of the Serra de Sant Gervàs (ridge) and the village of Torogó.
The route then goes on to Espluga de Serra. Along the way it is possible to enjoy the peace and quiet of the landscapes of the La Terreta region. Further along the path, visitors will come to the Font dels Capellans (priest’s spring) where it is possible to take a refreshing drink of water before heading on towards Castellet. At this point the trail leaves behind this shrub-dominated landscape and visitors will begin to see a few oak trees, and also holm-oaks and white beams. The local geology also changes at this point. The limestone cliffs are left behind and trekkers will come across large conglomerate formations, amongst which it is particularly important to highlight the “montserratina” formations, which are reminiscent of the rock formations found at Montserrat.
The trail then passes the village of Castellet and the spring of the same name and continues on to the crossing at Aulàs. Visitors will now find themselves in the Roureda d’Aulàs (a mixed forest of small-leaved and Martinenc oaks - Quercus humilis), which is the most extensive oak grove in the Catalan Pre-Pyrenees.
The last place of special note along the route is the village of Sapeira, where it is recommended to visit the church of Santa Maria, with its triple archivolt door and (more recently constructed) square tower. From the church square and the Mirador of the Roca del Castell, it is possible to see the cliff of Turmeda and its important vulture colony.
The route then returns to Pont d’Orrit, which is where the Ruta de la Vall dels Voltors ends.

The Serra de Sant Gervàs (Saint Gervàs’s Ridge) is located between the mid Pre-Pyrenean depression and the Pyrenean axis. This is an area of transition between Eurosiberian, boreoalpine and Mediterranean vegetation. As a result, it contains plant communities associated with each of these major vegetation types.
In the past, the main crops grown on the local plains and lowlands were cereals, but these are now grown on only the gentler slopes. This has meant that the lower parts of the ridges have been re-populated by small-leaved oak species.
The mid-slope areas of the ridges are covered by groves of oak and Martinenc oak.
The pine forests of La Terreta are largely the result of the reforestation programmes that were carried out during the 1960s, 1970s and 1990s.
The mid to high slopes are occupied by box-scrub. These vegetation communities represent the first stage of degradation of small-leaved oak groves and are the result of previous over-grazing by livestock: this continued until relatively recently. Two places that deserve special mention are the Fageda de Lleràs (a beech wood), which is located in the Castellet depression (in fact, it is surprising to find this type of vegetation on a Pre-Pyrenean ridge like this), and the Roureda d’Aulàs (the oak grove with the largest horizontal extension in all the Pre-Pyrenees).

Birds are the best represented group and birds of prey constitute the most interesting sub-group amongst the bird population. The most representative species are the bearded vulture (Gypaetus barbatus), griffon vulture (Gyps fulvus) and Egyptian vulture (Neophron percnopterus). Other birds of prey that merit particular mention include the golden eagle (Aquila chrysaetos), eagle owl (Bubo bubo) and peregrine falcon (Falco peregrinus).
The most numerous mammal species found in this area are the wild cat (Felis sylvestris), badger (Meles meles), fox (Vulpes vulpes) and wild boar (Sus escrofa). The Pyrenean chamois (Rupricapra pyrenaica) is also an occasional visitor to the area.

The Serra de Sant Gervàs is formed from geological materials of sedimentary and particularly calcareous origin. As a result, the surrounding landscapes are typically karstic, with impressive rocky walls, stony ravines and hollows. At the same time, the fact that the river Noguera Ribagorçana passes through the ridge means that its terraces also contain carbonate clasts. In the area around Castellet, the dominant rock type changes to conglomerate, with the most significant formation being that of the “montserratine” conglomerate, which is reminiscent of the rock forms associated with Montserrat.

La Terreta is located in the municipal area of Tremp, in the comarca of El Pallars Jussà. This is the largest municipality in Catalonia, covering a total area of 30,398 ha. The name given to this area - La Terreta - derives from that given to the river basin by the majority of the local population. The northern limit to this area is marked by the Serra de Sant Gervàs, with the Serres (ridges) of Gurp and Castellet marking its eastern limit, Montsec d’Ares defining its southern extension, and the Serra de Gia its western extent. The river Noguera Ribagorçana forms the central axis of this area. 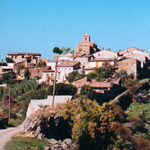 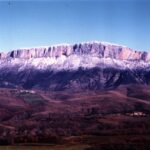 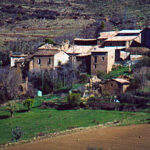 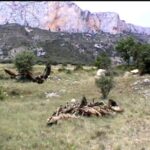 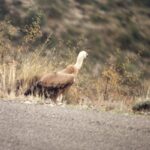