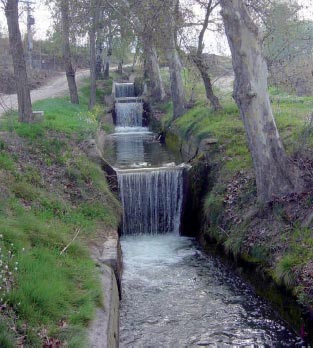 The Canal Route in les Garrigues

The northern part of the comarca (local district) of les Garrigues is irrigated by the waters of the Canal d’Urgell and the 4th irrigation channel of the same canal. It is here that visitors will find this 18 km-long signposted route which runs through the villages of Juneda and les Borges Blanques.
There are two possible starting points for this route: Juneda and les Borges Blanques.
Visitors starting from Juneda should follow the 4th main irrigation channel of the Canal d’Urgell.
The first interesting thing they will find is the coppice at the Desfet waterfall, which will lead visitors directly to the Primera Màquina (First Machine): a waterfall used for making electricity. Following the irrigation channel upstream, they will then come to the Segona Màquina (Second Machine). In the cases of both the first and second machines, only the falls now remain, as the buildings that used to house the turbines have been knocked down. Continuing along the route, visitors will discover the Nou Salts (Nine Falls), where there is a small power station and a leisure area.
Following the banqueta (the term used to refer to the paths that run along the banks of the channel) visitors will then reach the Canal d’Urgell. A short distance up this canal, they will find El Collet, an area planted with trees which has a mini power station for generating electricity. It is then on to Les Borges Blanques. From there, visitors will begin the southern part of the route, which follows the border between the irrigated and dryland areas and reveals an important contrast in countryside. Two kilometres later, visitors will come to a rest area. Without leaving the banqueta of the canal, visitors will then reach the Casella del Tei (a small building). From this point on, the route leaves the banqueta and follows the footpath to Miravall and leads on to the village of Juneda, where the route ends.

A brief history of the canal

Historically speaking, transporting water to arid zones has long been a highly practical and valued activity, while irrigating the Lleida plain has been one of the main objectives of the canal for many generations. The first evidence of irrigation on these lands dates back to the Middle Ages and the time of King Pere III (el Cerimoniós – the Ceremonious). From that time, and through until the middle of the 19th century, a number of irrigation channels were built; these included the sèquia nova (new channel) and sèquia reial (royal channel), the main canal, and the Tiurana reservoir and the auxiliary canal of Camarasa.
However, the present Canal d’Urgell, which was based on a project by Pere de Andrés i Puigdollers and constructed under the guidance of the engineer Domingo Cardenal i Gandasegui, was not built until 1853. The canal has a total length of 144.2 km and runs from the dam at El Tossal, in the municipal district of Ponts, to that of Montoliu de Lleida, where its waters flow into the River Segre.
The construction of the Canal d’Urgell, its four irrigation channels and the subsequent auxiliary canal opened the way to the construction of a series of other significant works, including reservoirs, tunnels, aqueducts, U-bends, falls and control points...
The route that we propose to visitors runs along a section of the 4th irrigation channel of the canal and the final stretch of the main part of the Canal d’Urgell, where it is possible to see some of the most significant of these constructions. It is important to highlight the Primera and Segona Màquines, in the municipal district of Juneda, the Nou Salts on the path to Les Borges Blanques, where visitors will find El Collet and the Font Vella (Old Spring), and the Casella del Tei back in Juneda.

The falls at both the Primera Màquina and the Segona Màquina were built with the intention of overcoming a sharp change in the level of the land and to reduce the velocity of the water flow.
It was not until the beginning of the 20th century, after some citizens from Juneda had visited the Exposition Universelle of París, that the falls were actually used to generate electricity.
The buildings that originally housed the machines and turbines are now in ruins and this space has been converted into a place for visits, from which it is possible to watch the water falling from the above the bridge and crossing the fourth irrigation channel.
The recovered Salt Desfet Park is a very well-known and popular destination for the local population.

People may think that the water falls were originally constructed in order to take advantage of the water power generated by the falls and to use its power to move turbines and generate electricity; quite a normal exploitation of this type of resource.
In this case, however, the Nou Salts (New Falls) were created for a different reason: to slow down the flow speed of water proceeding from other areas and descending a steep gradient. It was not until the end of the 20th century that this change in the level of the land was used to produce electrical energy by harnessing water power.
Nowadays, the land around the Nou Salts and the mini power station forms part of a very pleasant natural area.

El Collet and its immediate area is a space where it is possible to find various significant elements that deserve to be highlighted.
The first is the fact that this woodland area offers a lot of shade. It is therefore a good point from which to observe how a good quantity of the water in the main canal is diverted to the 4th irrigation channel via a system of sluice gates that now work completely automatically.
There is also a small, two storey casella (building). It should be noted that the majority of such buildings only have a ground floor, but a high ranking canal keeper used to live there, who coordinated all of the irrigation canals in the area, so this casella is larger than usual
Finally, there is the building that houses a mini power station which was once connected to a paper factory that relied on water power.

Near the Font Vella (Old Fountain) there is an old textile factory which has now been converted into a farm. The fountain, which is located in a depression in the Femosa valley, already existed long before the irrigation canal was constructed. The old fountain now forms part of the space that includes the chapel of Sant Cristòfol, which hosts a popular gathering every July.

As the canal was being constructed and the irrigation network came into service, it was necessary to control the water because it was, and continues to be, a relatively scarce and valued resource which must be equitably distributed. This need for control gave rise to the profession of canal keeper.
These men, who monitored the water, used to live in small houses that were strategically located along the course of the canal and whose job was to control and ensure its correct use. Nowadays, these small houses are uninhabited. The last canal keeper to live at the Casella del Tei was Senyor Freixes, who lived there with his family until the middle of the 20th century.
At this point it is possible to observe a large, and recently constructed, reservoir that is used to control the efficiency of the final stretch of the canal. 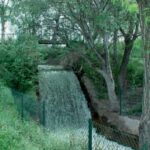 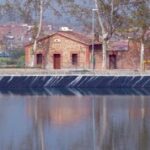 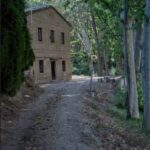 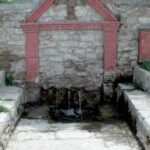